You do business online—it shouldn’t matter where you’re located geographically, right? If business internet is “the great equalizer,” isn’t West Virginia just as digitally viable as Virginia? Aren’t the Carolinas and the Dakotas all the same when it comes down to the 0s and 1s?

We wanted to know: where’s the place to be? Frontier Business’s research balanced factors like tech infrastructures (broadband speed, access, business phone, business bundles, etc.) with economic climates, workforce education, and overall quality of life in each state and region of the US.

The findings were fascinating, especially compared to our results from 2017. Colorado and Massachusetts kicked DC and Arizona out of the top ten. Arkansas may be a scenic state with enviable cost-of-living stats, but it’s frozen in 1997 when it comes to technology. And just because it’s home to Silicon Valley doesn’t mean that California is an internet leader—it didn’t even make our top five.

We found that, while great tech bases and solid work forces tend to go hand in hand, they also congregate in more expensive states. Even if the cost of living is cheap, your business will likely end up paying for it elsewhere. 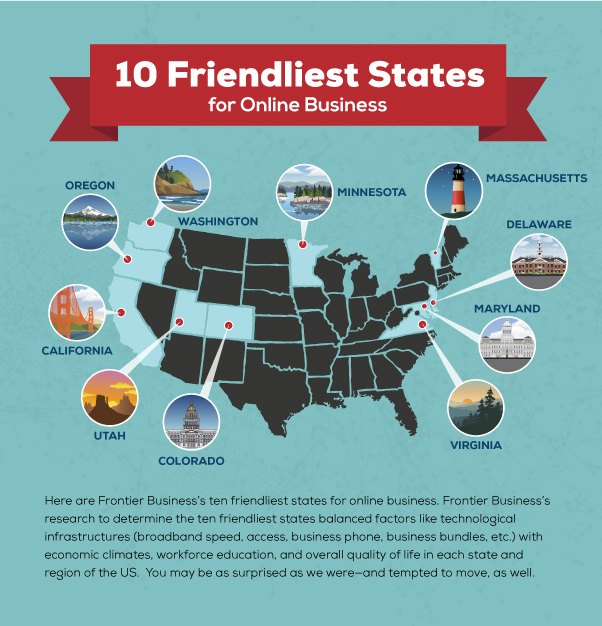 Here are Frontier Business’s ten friendliest states for online business. You may be as surprised as we were—and tempted to move, as well.

Washington is lush and green—in more ways than one. It jumped to the number one spot on our list from number two last year. The state’s average household income is higher than the national average, and there’s no personal or corporate income tax. The state famous for Amazon, Microsoft, Intel, and many more tech companies has an impressive broadband-internet service span. Washington is also home to some of the country’s most acclaimed vineyards, if you have a taste for wine.

You’ve seen Portlandia, but Oregon isn’t all about Portland. From Beaverton to Pendleton, access to broadband internet in the “Silicon Forest” is plentiful, and the state is in a startup boom. In fact, Oregon moved up from number four in 2017. Even though there’s no sales tax, Oregon’s thriving outdoor rec, arts, music, and craft-brewing scenes don’t come cheap. Transplants are flocking, regardless.

One of the fastest-growing tech sectors in the US—it isn’t nicknamed “Silicon Slopes” (sensing a nickname trend?) for nothing—Utah ranked at number one in technology. The state also has a lower unemployment rate than the national average and a wide array of outdoor terrain to take advantage of (including skiing/snowboarding on “The Greatest Snow on Earth”). Also, the state’s “religious” influences and quirky liquor laws have been greatly exaggerated—Utah isn’t Amish country.

“Virginia is for Lovers®,” goes the state motto. It’s also for the wired and the educated, ranking second for technology and sixth for workforce quality (factoring state higher-education opportunities, unemployment rate, minimum wage and more). However, that’s not enough to keep up with the rapid growth in the Pacific Northwest and Utah, which knocked Virginia from its number one spot for 2017. For the outdoorsy, there’s a diverse climate of mountains and beaches, but for spectators, the state has no major sports franchise to root for.

Colorado is a newcomer to our top ten because of a strong workforce, which makes up for slightly lower scores in technology and economic climate. Both the minimum wage and the median household income are higher than the national average. You’ll save on property taxes and utilities—good, since you’ll spend a pretty penny buying a home. There are plenty of things to do whether you’re cheering for one of the professional sports teams or exploring the state’s diverse landscape.

Despite rating lower than expected in technology at number eleven, California’s economic climate is every bit as strong as you’d imagine. Due partially to its sheer size and population, the state is still a powerhouse hub for both online and brick-and-mortar businesses, though it’s not the most affordable place to live—even a home in New York will set you back less money. But, when you’re buying into the most sought-after lifestyle on Earth, price is no object.

Delaware may be small, but the tax perks are big. The “Incorporation Capital of America,” claims more than half of the nation’s Fortune 500 companies—whether they physically reside there or not. In addition to being business-friendly, Delaware also scored well on the cost of living compared to the other top ten states. Lesser-known about Delaware: its beaches are the vacation destinations of choice in the Northeast.

Long hailed as one of the best-educated and wealthiest states in the US, Minnesota is also on the verge of becoming a rural-tech hotspot with hundreds of new businesses moving in annually. Up on the outer edge of the state, the startup-magnet city of Red Wing is making inroads to improve broadband service and position itself as a Silicon Valley of the North (yes, the term “Silicon Prairie” has already been coined for the middle swath of the country).

Much like Virginia, Maryland scored high in workforce and technology quality, but not so much in the cost-of-living column—although the state’s unemployment rate is lower than the national average. Maryland isn’t far from the federal resources of Washington D.C. or pretty much anywhere else thanks to the Port of Baltimore and a robust infrastructure of highways and international airports.

Massachusetts, the most populous state in New England, is new to our top ten states for online business. The state ranks second in workforce and fourth in technology. However, you’ll need the higher-than-average household income to afford the high cost of living. There’s no shortage of things to do in Massachusetts with several museums, historical sites, performing arts organizations, major league sports teams, and outdoor recreational activities.Friendliest States By Region 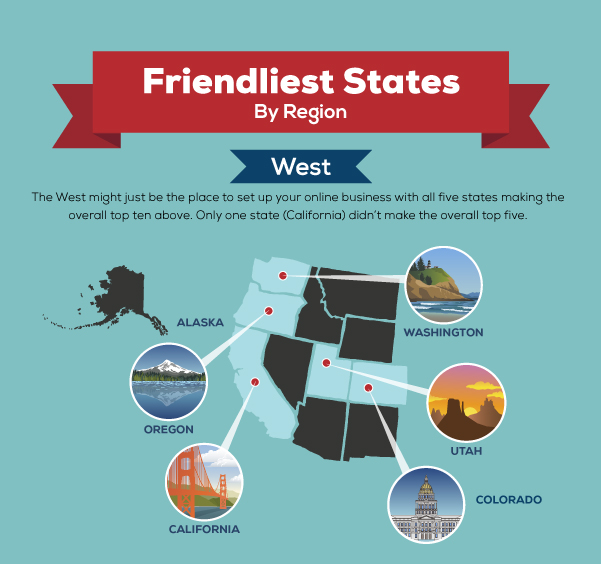 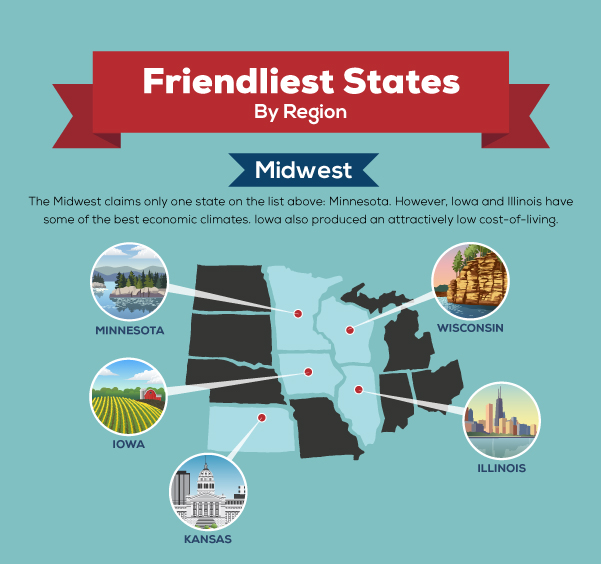 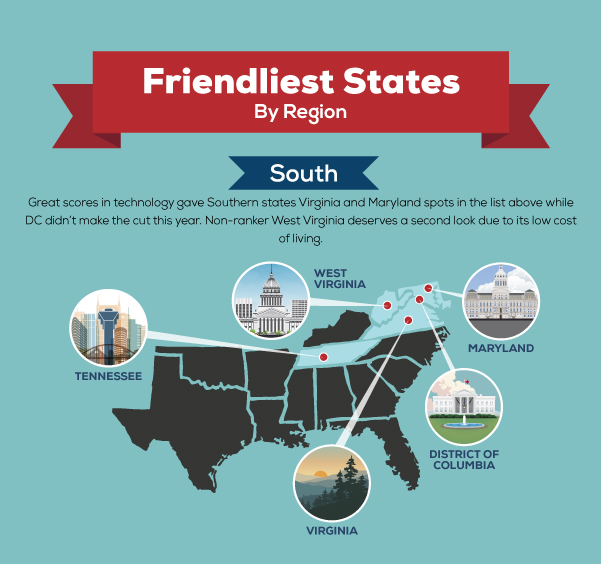 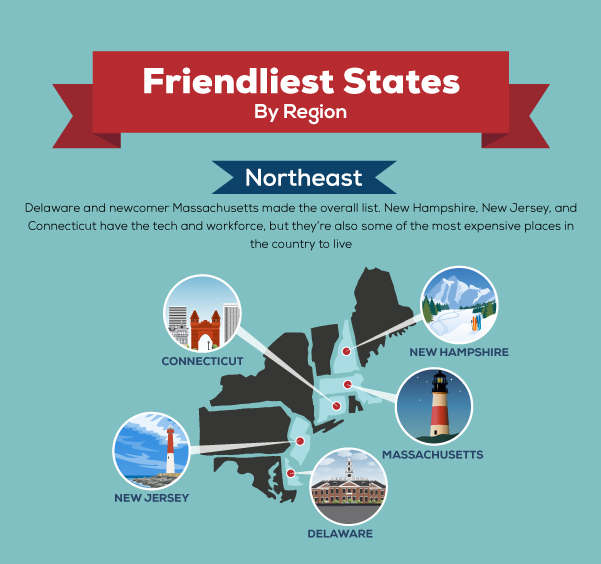 In Frontier Business’s study to determine the “10 Friendliest States for Online Business,” our analysts weighted the metrics of each state, and then region, of the US in favor of local technology, demographics, workforce, education, economic climate, and cost of living. You can find a full breakdown of the methodology here.